After I wrote my article, Boots, Boots, Boots:  A Living History Case Study, a number of my friends asked for a step-by-step guide to lacing ammo boots in the correct 1940’s manner.  They requested that I provide photographs to describe the method.  Here is the result.

Start by tying a small knot at one end of the bootlace.

Reproduction ammo boots from SM Wholesale.  All photos in this article by the author’s spouse.

The lace should then be threaded through the bottom eyelet of the arch side of the boot; thread the lace from the underside of the eyelet, and feed the lace through all the way to the knot at the other end.

Then thread the lace to the other bottom eyelet, this time from above.  This creates the first “rung” of the ladder-lacing method.

Next, take the lace across diagonally to the arch side of the boot and thread it through the next eyelet, again from behind.  Cross the lace over and create the second “rung”. 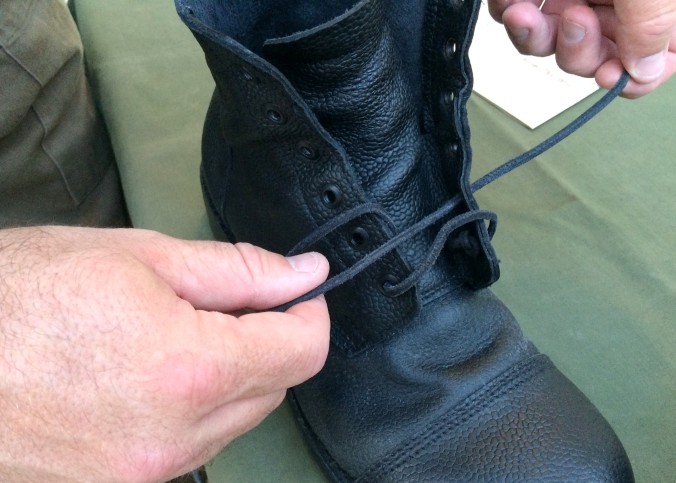 You can repeat these steps all the way to the top of the boot.  However, I normally do not lace the top two or three eyelets until I have the boot on my foot. 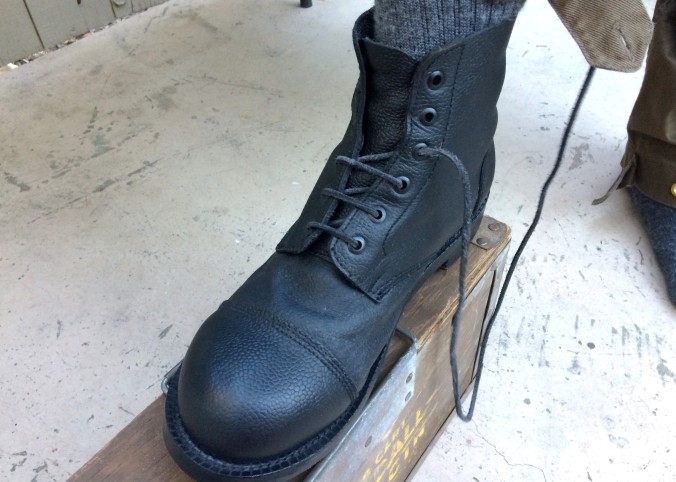 Once I reach the top of the boot, and no more rungs can be made, I thread the last eyelet from behind.

The remaining lace is then wrapped around the ankle two or three times (depending on how much lace is left).  The loose end is tucked under the wrap; I normally give it two or three tucks to ensure it does not come loose. 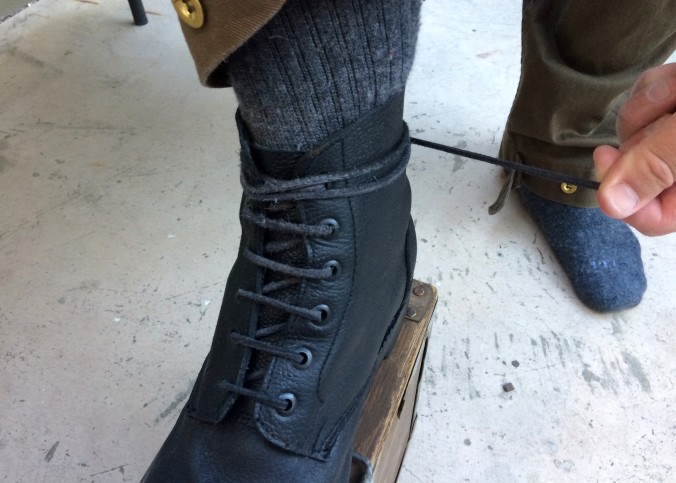 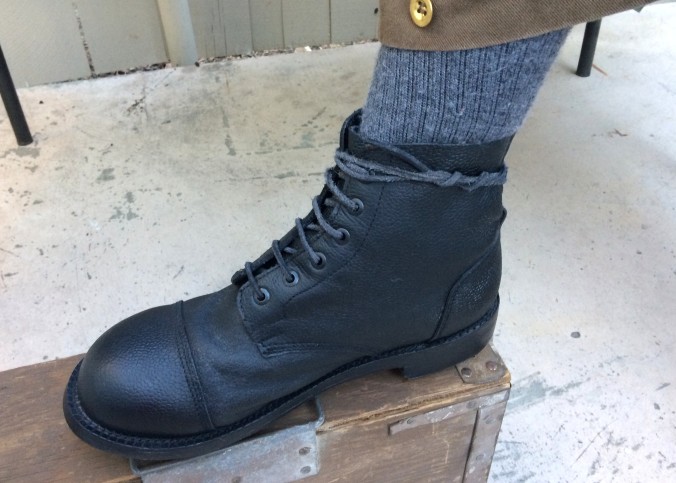 The gaiter is then put on normally.  Without any bow to make a lump, you should notice a smoother appearance to your gaiters.

The boots used in these photos are reproductions made by SM Wholesale, as used in the film, Dunkirk.  The quality of these boots is excellent.  Now I just need to give them a good polish.

One of my favorite motion pictures is Theirs is the Glory, directed by Brian Desmond Hurst and released in 1946.  The film tells the story of the Battle of Arnhem, and it is quite remarkable.  Rather than making a movie in the traditional manner by hiring actors and building sets, Hurst and his team worked in close cooperation with the British Army.  Just over 200 survivors from the British 1st Airborne Division were transported back to the ruins of Arnhem and Oosterbeek to recreate the epic battle.  The movie is also inter-cut with footage from the actual operation.

Early scenes show the troops receiving their final mission briefings, then going to bed for some needed rest.  The sharp-eyed viewer will notice that, in the barrack scenes, the soldiers are wearing post-war wool shirts with collars, rather than the wartime collarless shirts.  One must remember that they were still serving soldiers when the film was made, and simply wore their normal clothing as issued.  They were not actors, and some of the lines are delivered in a rather stiff or subdued manner; but looking closely at their faces as the film progresses, the viewer gets some sense of the horrors these men survived.

Historical events are inevitably distorted in film, and this is no exception.  Some of the most important figures from the battle, including General Urquhart and Colonel Frost, were unable to appear, and the film makes it seem as though Major “Freddie” Gough of the Reconnaissance Squadron was in command at Arnhem Bridge.  However, most of the major events of the operation are portrayed as authentically as was possible.

Maj. “Freddie” Gough as he appears in the film.

As the story progresses, some civilians appear.  Stanley Maxted, the Canadian journalist who broadcast from the battle, acts as narrator; it is interesting to compare his narration to archived recordings of his original broadcasts.  Kate Ter Horst is shown sheltering wounded men in her home’s basement, including a very moving sequence in which she comforts the wounded by reading from the Psalms; she was known by the troops as the “Angel of Arnhem”.

The level of realism is impressive, but as always, there are some compromises.  Arnhem Bridge was destroyed shortly before the end of the war and had not been rebuilt in time for the film; a large matte painting had to be used instead.  Other locations are easily identified, however, such as the badly-damaged spires of St. Eusebius Church and St. Walburgis Church in Arnhem, and the Hartenstein Hotel in Oosterbeek, which was used as the Divisional headquarters.  Major “Dickie” Lonsdale recreates his speech to a mixed force of defenders at the Old Church in Oosterbeek, just as he did towards the end of the fighting.

The Hartenstein Hotel in Oosterbeek.  This building was used as Divisional Headquarters, and was still battle-damaged when the film was made.

Most of the vehicles and weapons were real, with little use of props or special effects.  Troops can be seen firing actual flamethrowers, and the careful observer will notice the Bren guns firing real ammunition, including tracer, in a way that 1940’s film effects could not replicate.  However, a number of black powder charges were used to replicate artillery and mortar rounds, which caused a great deal more smoke than the real versions.

Comparisons with 1977’s A Bridge Too Far are inevitable.  A Bridge Too Far is epic in scale, and shows the entire operation, from British, American, and German perspectives.  Theirs is the Glory is more focused as it only shows Arnhem, and only from the British standpoint; Germans are rarely seen, even though their artillery fire is relentless.  However, there are some similar sequences in which the later film must have been influenced by the earlier.  For example, there is a famous scene in A Bridge Too Far in which a young soldier lifts a resupply container, puts it on his shoulder and starts running with it to friendly lines, until he is shot by a sniper.  The original drop containers weighed around 350 pounds when loaded with supplies; in Theirs is the Glory, a trooper attaches his toggle rope to a container and drags it behind him, which is much more realistic, but perhaps slightly less cinematic.  (Note:  for my review of A Bridge Too Far, click here.)

Theirs is the Glory is an extraordinary motion picture.  Anyone who enjoys World War II movies would enjoy it, and anyone with a particular interest in the British Airborne should see it.  It is also a good film for filmmakers to study, as it was made in such a unique way.

Theirs is the Glory is easy to find in the UK on Region 2 / PAL format DVD.  Americans and Canadians are not so lucky, as the DVD will not play in a normal Region 1 / NTSC format player.  Fortunately, Theirs is the Glory is often included in war movie DVD collections; it is currently available through Amazon US as part of a Best of British War Cinema 5-disc set.  It can also be found on YouTube.

There is also a new book that examines the films of director Brian Desmond Hurst and his portrayal of war and other conflicts; the focus of the book is “Theirs is the Glory”.  I have not had a chance to read the book, but I hope to in the future.

UPDATE:  I have just learned that Lieutenant Norman Hugh Henry Ashmore, pictured at the top of this article, died at the age of 95 on November 10, 2017.  Lt. Ashmore commanded No. 3 Platoon, 21st Independent Parachute Company (“The Pathfinders”) during the Battle of Arnhem, and recreated his role for Theirs is the Glory.

Theirs is the Glory: UK DVD through Amazon

Theirs is the Glory:  Arnhem, Hurst, and Conflict on Film

DVD cover from the UK release; this version will not play in most North American players.

Cover of the recent book on Brian Desmond Hurst, focusing on his film about Arnhem