In an earlier article, I wrote about the development of the famous Denison smock, as worn by the British Airborne Forces.  However, the Denison was only half of a two-part system.  The other component was the parachutist’s oversmock.

During the early days of the Airborne Forces, the uniforms and equipment were experimental.  The Royal Air Force naturally had an inventory of parachutes for escaping damaged aircraft, and the first paratroopers had to manually pull a ripcord to deploy their canopy.  It was not long before this method was determined unsuitable, and a static-line parachute was developed.  The volunteer paratroopers during those early days were certainly brave, as there were a number of injuries and even fatalities; each incident was thoroughly investigated and often resulted in a modification to the equipment or the training program.  The X-type static line parachute, also called the “Statichute”, eventually developed an impressive reputation for reliability.  However, there was still the occasional mishap, including incidents of the parachute canopy not fully opening and deploying; this dreadful situation was known as the “Roman candle”.

To reduce the number of accidents, it was considered vital to prevent any entanglements between the paratrooper, his equipment, and the parachute.  In 1942, the Denison smock and the parachutist’s oversmock were both adopted and entered production; together, these items replaced the earlier “step-in smock”.  The Denison was worn over the wool battledress uniform, but under the webbing equipment.  The oversmock was then worn over all other uniform and equipment items, separating them from the parachute harness and rigging lines.  Both the oversmock and the step-in smock it replaced were also called “jumping jackets”, which can easily cause confusion when reading original source material.

“Somewhere in England”, April 1944.  Paratroopers check their equipment prior to a training jump; the oversmock can be seen over the Denison and webbing equipment but under the parachute harness.  Photo courtesy of the Imperial War Museum.

The parachutist’s oversmock was a sleeveless garment made from green denim material, with a full-length zipper.  Like the Denison smock, it had an “ape tail” to be snapped up between the legs to keep the garment in place during the jump.  However, the fasteners had a somewhat different arrangement; while the Denison’s ape tail snapped to the inside of the smock, the oversmock’s tail fastened to the outside.  The oversmock also had a pair of elasticized pockets near the bottom hem, each intended to hold a single grenade to assist in an opposed landing.

The 1942 pattern parachutists’ oversmock or jumping jacket; this example was made in 1945.  The full-length zipper, ape tail and grenade pockets are clearly seen.  Photograph by the author. 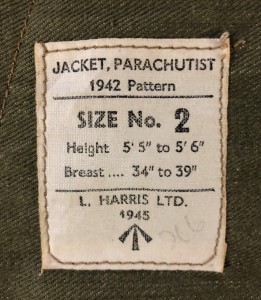 Label from the oversmock shown above.

While the Denison was designed for paratroopers, it was also issued to glider troops and, eventually, the Commandos.  By contrast, the oversmock was only ever used by paratroopers, as it was specifically designed to be worn during the parachute descent.  In training, the oversmock could be collected and returned to stores, but on operations, it was considered disposable and was to be removed and abandoned on the drop zone.

Many historians have written that the parachutist’s oversmock was not used until shortly before D-Day; however, there is evidence indicating that 1st Parachute Brigade used both the Denison and the oversmock in North Africa in late 1942.  Major General F.A.M. Browning visited the Brigade in December and noted both items in the appendix to his diary.

Jumping jacket.  New type very good.  Brigade dislike the idea of discarding it on landing as it is useful as a garment as well as a jumping jacket.

(As quoted in Tunisian Tales by Niall Cherry)

The above entry is in contrast to the earlier jumping jacket or “step-in smock”, which was typically retained after landing.

There is a remarkable photograph of troops from 2nd Parachute Battalion in North Africa showing at least one man wearing the oversmock.  This is the earliest photograph I have seen of this garment, a full year-and-a-half prior to D-Day.  Additionally, the man most clearly wearing the oversmock appears to be wearing it over the wool flannel shirt, without the Denison or wool battledress, corroborating Browning’s statement that it was “useful as a garment” in its own right.  Later photographs, however, only show the oversmock in its intended role for training or operational parachute drops. 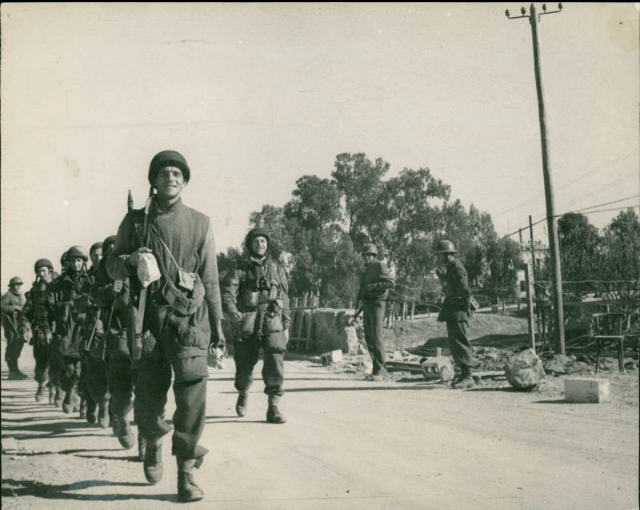 Men of the 2nd Parachute Battalion in North Africa soon after arrival in November, 1942.  The leading man is wearing the oversmock; his exposed sleeves appear to be those of the wool flannel shirt, without battledress or Denison.  He is wearing a cloth bandolier of rifle ammunition, but does not appear to have any webbing equipment.  The rest of the men look to be dressed more normally.

As noted above, the parachutist’s oversmock was normally abandoned on the dropping zone; there is little reason to have one at a tactical reenactment.  However, it is a useful item to have for public displays, particularly at air shows.

Original oversmocks sometimes appear on the collector’s market and are generally less expensive than original Denison smocks.  However, larger sized oversmocks can be difficult to find.  Fortunately, quality reproductions of this item have recently become available at a reasonable price; I purchased one, and am very pleased with how well it compares to the original.

Gordon, David B.
Tommy:  The Collector’s Historical Perspective to the British Soldier of the Second World War
Volume One:  Uniforms, Weapons and Equipment of the Airborne Forces
Pictorial Histories Publishing Co., Inc., 1998